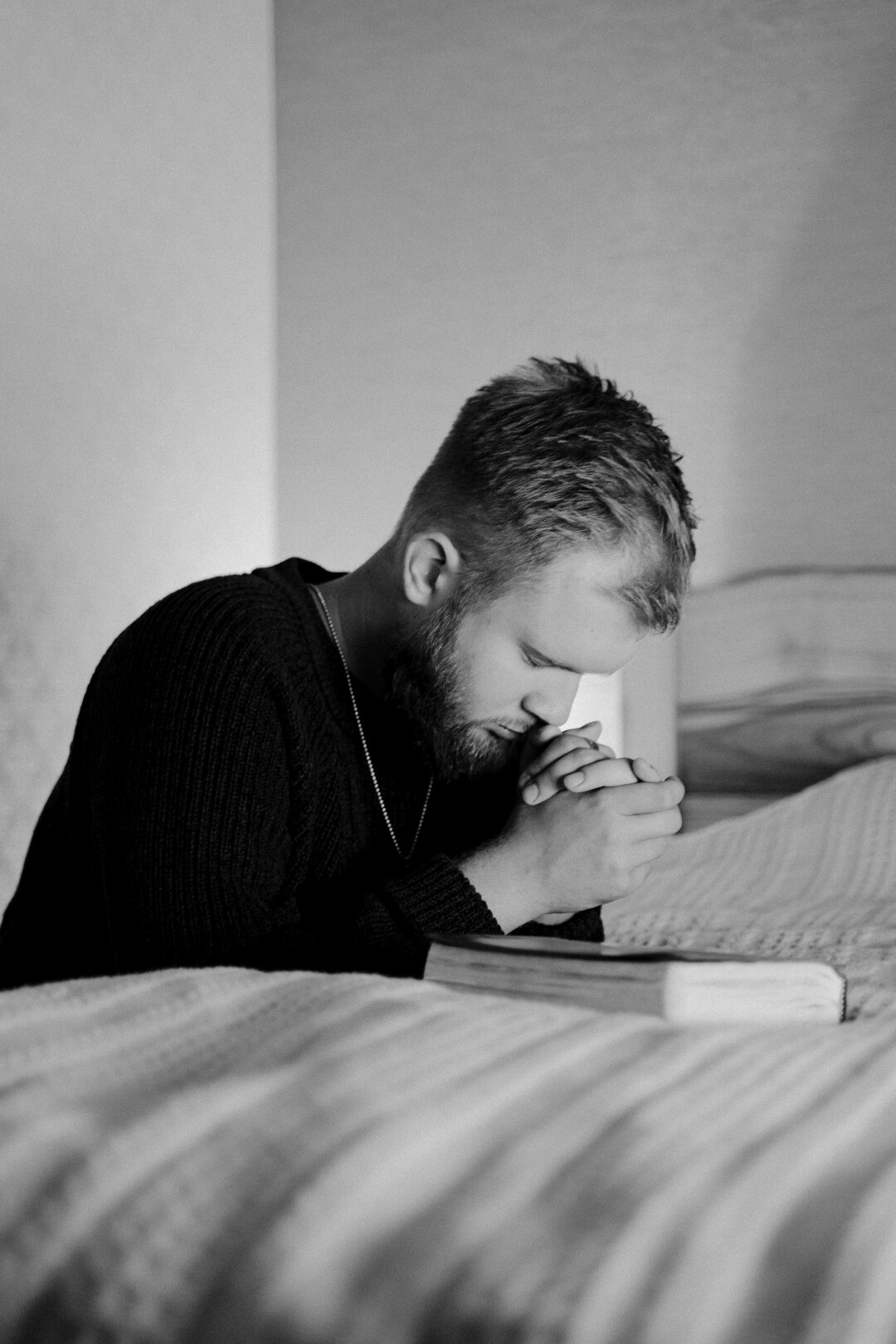 Mark 14:26–42 (ESV)
26 And when they had sung a hymn, they went out to the Mount of Olives. 27 And Jesus said to them, “You will all fall away, for it is written, ‘I will strike the shepherd, and the sheep will be scattered.’ 28 But after I am raised up, I will go before you to Galilee.” 29 Peter said to him, “Even though they all fall away, I will not.” 30 And Jesus said to him, “Truly, I tell you, this very night, before the rooster crows twice, you will deny me three times.” 31 But he said emphatically, “If I must die with you, I will not deny you.” And they all said the same.

32 And they went to a place called Gethsemane. And he said to his disciples, “Sit here while I pray.” 33 And he took with him Peter and James and John, and began to be greatly distressed and troubled. 34 And he said to them, “My soul is very sorrowful, even to death. Remain here and watch.” 35 And going a little farther, he fell on the ground and prayed that, if it were possible, the hour might pass from him. 36 And he said, “Abba, Father, all things are possible for you. Remove this cup from me. Yet not what I will, but what you will.” 37 And he came and found them sleeping, and he said to Peter, “Simon, are you asleep? Could you not watch one hour? 38 Watch and pray that you may not enter into temptation. The spirit indeed is willing, but the flesh is weak.” 39 And again he went away and prayed, saying the same words. 40 And again he came and found them sleeping, for their eyes were very heavy, and they did not know what to answer him. 41 And he came the third time and said to them, “Are you still sleeping and taking your rest? It is enough; the hour has come. The Son of Man is betrayed into the hands of sinners. 42 Rise, let us be going; see, my betrayer is at hand.”

If we dare to dwell on this passage, it is unsettling.  What’s happening is uncomfortable to us, everything seems to be imploding and Jesus is filled with raw emotions.  The weight of what is unfolding is taking its toll on the disciples emotionally and physically.  Try to imagine how the disciples hear Jesus’ words that they will all fall away from Him.  Imagine Peter’s reaction when Jesus tells him that he will deny that he even knows Jesus at all, not just once, but three times.  There is an incredible heaviness that is weighing on the disciples and especially on Jesus as the time of Jesus’ arrest and crucifixion inches ever closer with each passing second.

And now Old Testament prophecy is unfolding; the disciples and we, are witness to it all.

In this passage, we see the full humanity of Jesus in His sorrow, in His stress, and in His prayer.
It’s quite a different picture of Jesus than what we’ve been used to as we’ve walked through Mark’s Gospel.  The image of Jesus has always been one of strength and hope, of healing and help.  Jesus had the answers when others had challenged His authority.  He brought joy to everyone He touched, to everyone He healed.  He taught with conviction, raising the hopes of everyone as He spoke of God’s mercy and forgiveness and the kingdom that was unfolding in His presence.  There were other times when we saw Jesus frustrated and full of compassion but even then, people could sense the strength and new life in Jesus.
But now, as Jesus prays, we get a much different picture and we’re completely unsettled by what we see and hear.

Jesus prayed that this hour, this cup (of His pending crucifixion) would pass, and yet Jesus affirms His submission and obedience to the Father’s will.  We can only barely comprehend what was happening, but Jesus was staring it in the face: the crucifixion, His death.  He was standing on the edge of this abyss knowing what is about to happen.  His prayer at this moment is understandable and His resolve to follow the Father’s will is unbelievable.

We also see the disciples at one of their lowest points.  They can’t stay awake for Jesus.  They are overwhelmed by what is happening and are completely drained.  They can’t even watch and pray.  Despite their blustering claims to stay with Jesus and die with Him, they can’t even stand watch and soon they all will abandon Jesus and flee.  They stand in sharp contrast to Jesus - they will flee while Jesus remains faithful.

It is unsettling to read this passage, but I think we have an opportunity to learn about prayer if we look at what Jesus asks of the disciples.  Jesus asks them to “watch and pray.”
I don’t think we realize how amazing and powerful it is to watch and pray for someone.  When we pray for people God does something mysterious.  The Lord, in some unseen way, allows us to come close and stand alongside others.  Distance is not an issue, and neither is the time of day or our location.  What matters is that we stand watch and pray.

So who can you pray for?  And know that you are constantly in my prayers.

James 5:13-15 (ESV)
13 Is anyone among you suffering? Let him pray. Is anyone cheerful? Let him sing praise. 14 Is anyone among you sick? Let him call for the elders of the church, and let them pray over him, anointing him with oil in the name of the Lord. 15 And the prayer of faith will save the one who is sick, and the Lord will raise him up. And if he has committed sins, he will be forgiven.